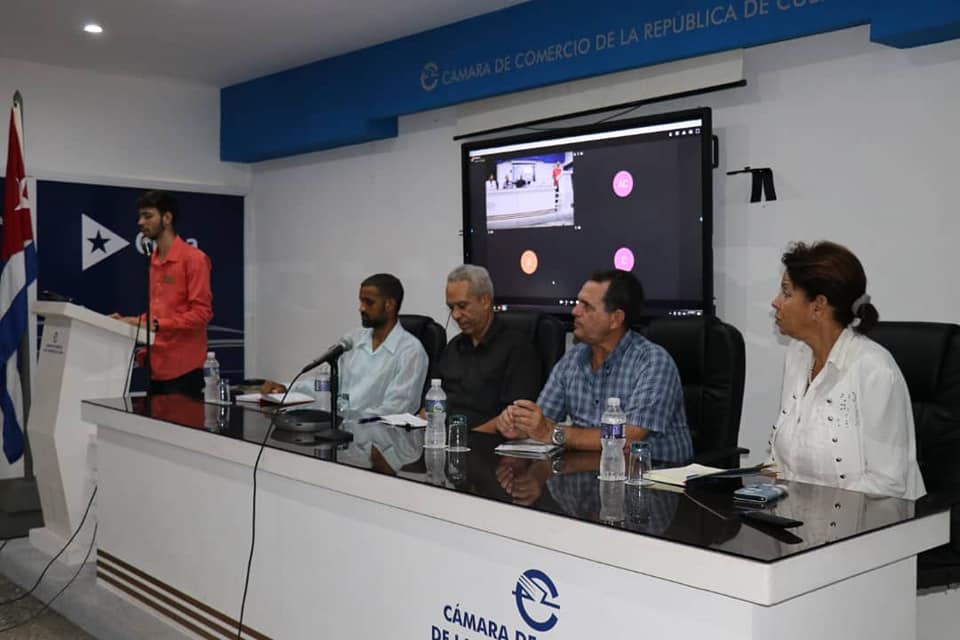 The Chamber of Commerce of the Republic of Cuba (CC), about to reach its 60th Anniversary, as part of the accompaniment and support to Cuban businessmen, continues working uninterruptedly. Here is a brief summary of the events of the last week.

The Coal Group was formed on October 22 in a cordial meeting chaired by Raquel Acosta, director of Associates of this institution, and in which entrepreneurs from various forms of management and from several companies that belong to Clúster Agrícola participated.

This product has in #Cuba with ample potential for export and foreign investment.

PRESENTATION OF PROGRAMS AND SERVICES

Indistinctly, economic actors of the #cultural industry and hydraulics sector met at the CC to learn and exchange about the new #cameral #programs and #services to boost #exports, productive linkages, among other objectives.

Both meetings were chaired by Antonio Luis Carricarte Corona, head of the Chamber; Ana María Pellón, director of Cultural Industries of the Ministry of Culture of Cuba and Wency Hojas Mazo, specialist of Research and Quality of Radio Taino.

President Carricarte highlighted the role of the cultural industry in the current national context, and advocated for strengthening relations with this sector, so as to achieve a more effective #acompaniment and support.

Bladimir Acosta, first vice-president of the National Institute of Hydraulic Resources, also exchanged with the economic actors of the hydraulic sector, who highlighted the role of the Chamber for the promotion, chaining and internationalization of the companies.

The new chamber programs seek to promote an adequate implementation of the processes of #competitiveness, value chains, internationalization and #digitaltransformation in the business system of #Cuba.

The legal and regulatory framework for the creation of MSMEs, its objectives, scope, perspectives, and the progress achieved so far in the implementation of this policy, focused a new exchange in the Chamber of Commerce of the Republic of Cuba with the diplomatic corps accredited in #Cuba.

With representatives of the diplomatic missions accredited in #Cuba from the region of Central America and Dominican Republic, began the meeting chaired by Milena Pérez Cepero, and in which executives and specialists from MINCEX and MINREX participate.

Ana I. Pérez, MINCEX official, commented on the progress in the incorporation of new economic actors and precsió that of the approved MSMEs, 5251 are private and 51 state; 52% are business reconversions and 48%, new ventures.

Chaired by Rubén Ramos Arrieta , vice president of the Chamber of Commerce of the Republic of Cuba, the Business Meeting was held, with the participation of representatives of the diplomatic missions accredited in Cuba of Russia and Belarus.

The words of greeting were given by Inalvis Bonachea, Director of Trade Policy with Europe of Mincex.

It was a propitious space for exchange with representatives of SMEs, and Russian companies accredited in #Cuba.

The Ministry of Foreign Trade and Foreign Investment – Mincex and the Ministry of Domestic Trade of Cuba provided information on the current legal and regulatory framework for working with new actors.

For their part, the businessmen thanked the initiative of the Chamber of Commerce of the Republic of Cuba as an opportunity to inform the European diplomats about the activities they carry out, as well as their work towards the internationalization process in the search for business and investment opportunities and the identification of sources of financing for the development of small Cuban enterprises.

The interventions of the MSMEs: Guajiritos SRL, NostalgiCar Tours & Garage and Transportes Ruedas Caimán S.R.L. made possible the interaction among the participants and demonstrated that the linking of new actors with the socialist state enterprise is vital for the economic growth of the country.

During the meeting, led by Rubén Ramos, vice-president of the Chamber, REPROMAS MSMEs, PDL Las Margaritas and L.R. PILARES S.U.R.R.L. presented their #products and #services.

The event is part of the cycle of meetings that the Chamber has been developing since last September with the aim of supporting the #internationalization processes of the new economic actors that have gradually and steadily been inserted in the #entrepreneurial network of the country.