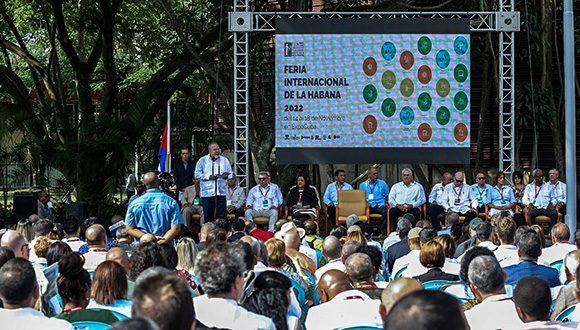 During the closing ceremony of the professional section of the event, the government representative launched the call for the next edition of the exchange, which will be held from November 13 to 17, 2023.After two years without meeting, there is a different atmosphere in Expocuba, and the biggest milestone of this edition is that we not only have Cuban and foreign companies, but also new economic actors and Cubans living abroad, demonstrating the opening that will allow building a better country, Gonzalez stressed.On that path, the meeting contributed to identify business projects in priority sectors such as agri-food, energy, biopharmaceuticals, tourism, mining and telecommunications, among others, he added.

The achievement of all the proposed objectives was materialized in the visit of government and business representatives from 62 countries and 35 foreign Chambers of Commerce at different levels, he said.With more than 16,500 square meters contracted, traditional and renewed commercial partners from countries such as China, Russia, Spain, the United States, France, Canada, Mexico, Brazil, Venezuela, the United Arab Emirates and Laos converged in the most important commercial exchange of the island.In addition, there were 402 Cuban professional participants, including more than 300 state-owned companies, around 70 micro, medium and small enterprises (MSMEs) and three Cuban non-agricultural cooperatives, he said.On the other hand, the main challenge now is to implement the agreements reached between companies, organizations and participating actors, for which he called for the elimination of obstacles that may hinder the business and investment climate, he remarked.González thanked the foreign exhibitors for their commitment to Cuba, despite the restrictions of the economic, commercial and financial blockade imposed by the United States on the Antillean nation for more than six decades; and the workers of Grupo Empresarial Palco and Expocuba for their efforts to make the event possible.

During the closing ceremony, the fair’s Organizing Committee recognized the exhibition pavilions of South Africa, Italy, Mexico and Venezuela for the quality of the design and the massive participation of companies in them.Gold medals were also awarded for compliance with requirements, innovation and customer satisfaction, and industrial design and visual communication awards were given to products from countries such as Cuba, Holland, Panama, Spain, Russia, Italy and Germany.The good communication of the participating companies was recognized by the Cuban Association of Social Communicators, which awarded several prizes, a special mention and a Grand Prize, which went to Havana Club Internacional S.A.Fihav 2022, which began on November 14 and will remain open to the public until tomorrow, hosted the V Foreign Investment Forum, where the update of the portfolio of opportunities for this activity in Cuba was presented.As part of its agenda, business rounds and panels were held on the functioning of the single window for foreign investment, the work of promotion agencies and investment opportunities for Cubans living abroad, among other topics.

(With information from Prensa Latina)