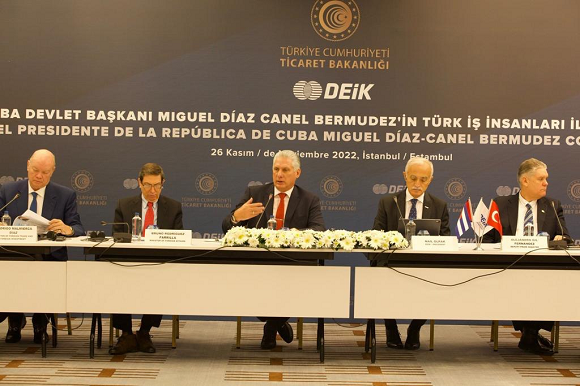 On a stopover in Istanbul, Türkiye , the president of the Republic of Cuba, Miguel Díaz-Canel Bermúdez, held a meeting with Turkish businessmen convened by DEIK, a Business Diplomacy Organization that manages the foreign economic relations of the Turkish private sector.
This was announced on his Twitter account on Saturday by the Presidency of Cuba, which reported that according to the president, the purpose of the meeting is to promote ideas and projects to increase the relationship between Turkish businessmen and Cuba.

DEiK is a Business Diplomacy Organization assigned with the task of directing the foreign economic relations of the Turkish private sector through its 146 Business Councils, 95 Founding Institutions and 2,000 individual members representing Turkey’s business community and its leading entrepreneurs, contributing to the functioning of the institution on a ‘voluntary’ basis particularly in foreign trade, international investments, services, procurement and logistics; analyzing investment opportunities in the country and abroad.